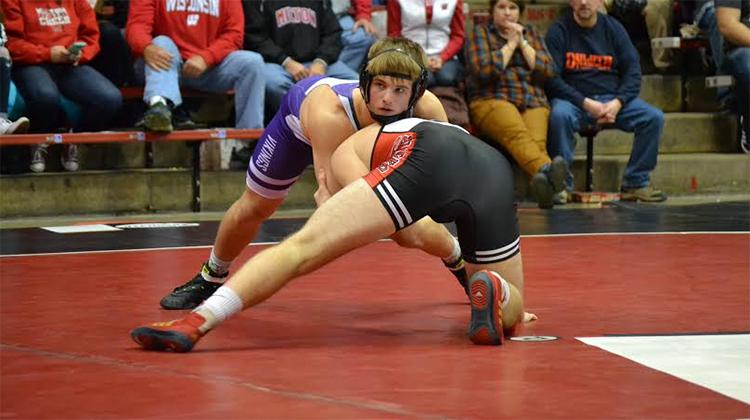 Stoughton’s Tyler Dow opened this season with the most wins of any active Wisconsin high school wrestler.

His 146-21 mark to begin the year puts him in a position to feasibly reach 200 career wins, a staggering number.

But with a chance at one more state title, the senior is focused on the process rather than the result.

“Personally, I don’t really look at wins or losses. Yeah, you win and yeah, you lose. It happens. I just go out there and take each match one match at a time,” Dow said. “You get into the tournaments and you have four matches or five matches in a tournament but you really break it down. First round, you have to go out there and get used to competing that day, see how you’re feeling, get the win. Then look at your next opponent. Take one match at a time and your wins will start to add up.”

The wins certainly have started adding up. In addition to his impressive folkstyle record, Dow has made a splash in both Greco and freestyle. This past summer, he was a national runner-up in each style.

People outside the state are taking notice.

Dow is ranked fifth in the nation at 160 pounds by FloWrestling and is the No.9 high school grappler in the country at 170 pounds according to InterMat.

Arguably, the only thing more impressive than what Dow has accomplished is what potentially sits in front of him.

He is one of four wrestlers from the state’s 2018 class committed to compete at the University of Wisconsin. Not only do the Badgers provide the chance for Dow to compete at the NCAA Division I level, their place in the Big Ten puts him in the thick of the nation’s premier college wrestling conference.

Continuing to improve as a high school wrestler is certainly still high on Dow’s list of priorities this season. However, he has an eye on the future when considering areas of focus.

Last week, Dow got his latest taste of competing at the UW Field House. His Vikings squad topped rival Milton 67-11 at the first ever “Battle at the Barn.”

“It was exciting to see Tyler wrestle here at the Field House. He has a bright future at Wisconsin,” UW head coach Barry Davis said. “As for right now, it’s about enjoying his senior year of high school and enjoying his teammates and having fun. We’ll take care of the rest when he gets here.”

It’s a message Dow has taken to heart.

“There’s a future for me. I know that and I’m excited for that. But I just break things down,” Dow said. “I have to finish out this high school year and grow where I need to grow.”

Though a promising college career is rapidly approaching, Dow has plenty of business remaining at the high school level.

“I’m really excited about our team,” Dow said. “We have a lot of young guys in our lineup and on our team. Graduating a great senior class [last year], I feel like a lot of people outside of our community and outside of our team really had questions. We know that it doesn’t matter that we graduated a great class. Our young guys can step up and do just as well as them.”

So far, the Vikings haven’t missed a beat. Fresh off its third consecutive runner-up finish at Team State, Stoughton is the No.2 team in D1 in Wisconsin Wrestling Online’s Team Rankings.

Last weekend, they took second in a pool of five state-ranked teams at the Dells Duals Classic with a 3-1 record. The Vikings scored wins over D1 No.5 Slinger, D2 No.3 Freedom and D2 No.6 Melrose-Mindoro/GET.

Stoughton’s lone loss of the tournament (and of its season, to this point) came at the hands of Stratford, the No.1 team in D3 and the No.50 team in the nation according to InterMat. The Tigers topped the Vikings 31-28.