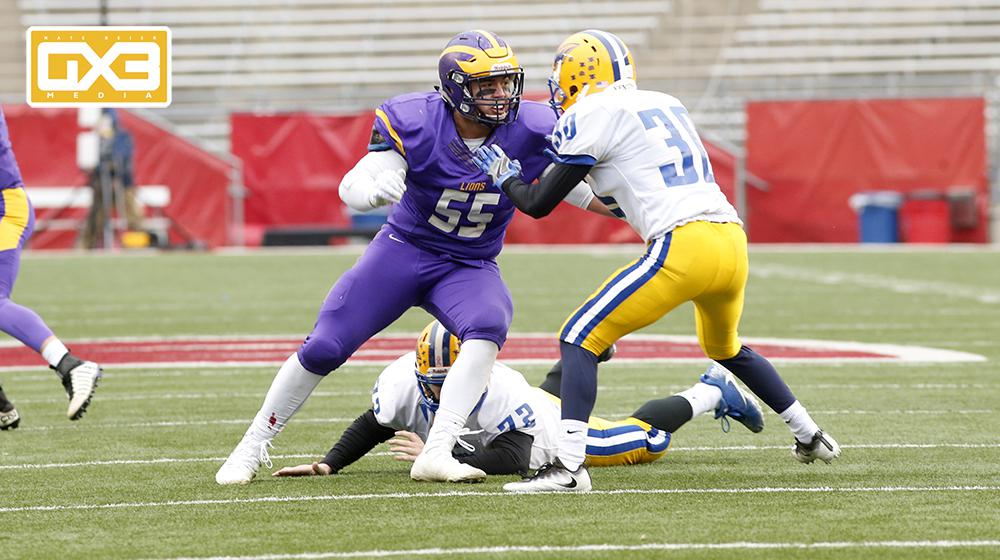 The Tim Krumrie Award is given annually to the state's top senior defensive lineman as part of the WSN Senior Football Awards. The award is named after Tim Krumrie, a former Mondovi and University of Wisconsin athlete who would go on to star in the NFL for 12 seasons, including two Pro Bowl appearances.

The pre-season watch list was trimmed down to 16 semi-finalists, and six finalists for the award have now been selected. Winners are announced the week of the state finals.

Keeanu Benton, Janesville Craig - Benton earned First Team All-Conference recognition in the Big Eight this season after recording 75 tackles, 7 tackles for loss, and a pair of sacks for the Cougars. "His stats on the season are pretty good, and more important he did his job of taking on as many double teams as possible so that our linebackers were free to make plays." Benton gave a commitment to Wisconsin in the off-season.

Rico DeLeon, Chippewa Falls - Longtime Chippewa Falls coach Chuck Raykovich calls DeLeon the best defensive player he's coached in 44 years, no small compliment for someone who has had some outstanding players over the years. Raykovich raves about DeLeon's quickness, speed, and most important, his motor. For the season, DeLeon had 102 tackles, 32 tackles for loss, 4.5 sacks, and 4 forced fumbles.

Adrian Garcia, Racine St. Catherine’s - Garcia is an incredibly disruptive force in the middle of the Angels defense, which has limited opponents to just 10 points and about 120 yards of offense per game. He has 81 tackles, 24 tackles for loss, 3 sacks, and a fumble return touchdown in his senior campaign.

Jake Karchinski, West De Pere - Karchinski earned unanimous First Team All-Conference recognition in the Bay a year ago and should be in store for even bigger things as a senior. Through the unbeaten Phantoms' first 13 games he recorded 53 tackles, 16 tackles for loss, and 7.5 sacks. "Our defense puts him in key positions to stop an opposing team's best plays," said head coach Jack Batten. "What they usually choose to do is double team him, leaving others open to make a play or they simply run away from him abandoning their best stuff. In a sense Jake's presence allows us to force teams to beat us left handed." He committed to Iowa earlier this year, with other offers from Syracuse, Miami (OH), North Dakota State, and many others.

Reed Ryan, Waunakee - Ryan was a unanimous First Team All-Conference choice in the Badger-North last year, but his play in the Division 2 state championship game burst him onto the statewide scene. In a comeback win over Brookfield Central, he had 7 tackles, 5 tackles for loss, and 2 sacks, plus arguably the biggest play of the game when he forced a fumble deep in Lancer territory that changed the tide of the game. He finished his junior year with 69 tackles, 26 tackles for loss, and 16 sacks, and was even better as a senior. Ryan had 80 tackles, 37 tackles for loss, 18 sacks, 6 forced fumbles, 4 fumble recoveries, two blocked kicks and a fumble return touchdown in 2018. Also an outstanding wrestler, Ryan has accepted a football scholarship from North Dakota State.

Mark Shields, New Berlin Eisenhower - Shields posted a big junior campaign capped by a state finals record 23 tackles. On one of the state's most dominating defenses, he's been the key figure this season, with 87 tackles from his line spot with 10.5 sacks, 3 fumble recoveries, a forced fumble, and two defensive touchdowns. "The stats really only tell part of the story with Mark as teams are obviously trying to run away from him and avoid him and he has also not played many full games due to the scores of our games," said head coach Matt Kern.