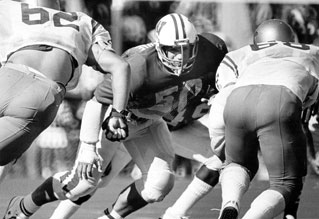 Tim Krumrie had a distinguished and productive career in the NFL, but with strong roots in the state of Wisconsin he is an excellent representative for the outstanding senior defensive lineman award. Tim played his high school football at Mondovi High School. Also a standout wrestler in high school, Krumrie won the heavyweight state title in 1979, the last year all schools were combined in one division. Tim would take his considerable talents to the University of Wisconsin, where he would leave quite an impression on the home state program. Krumrie led the Badgers in tackles all four years he was in the program, and was a three-time All-Big Ten selection. He was the schools all-time leading tackler at the time of his graduation, and still sits at #3 on the list today. He still holds the record for most solo tackles in a career at 276.

Despite this impressive collegiate resume, Krumrie wasn’t taken until the 10th round of the 1983 NFL Draft by the Cincinnati Bengals. It didn’t take long for him get noticed however. He played in all 16 games as a rookie, starting twice. The next year he took over a full-time starting gig going on to play in 188 games in 12 seasons, starting 161 of them. He made the Pro Bowl in 1987 and 1988 and helped the Bengals to the Super Bowl in 1989. It was in that game he suffered one of the most famous injuries in league history, breaking his tibia and fibula, which required surgery and a steel rod to be inserted in his leg. He started the opening game the following season and played five more years before retiring following the 1994 campaign. He currently serves as the defensive line coach for the Kansas City Chiefs after three years with the Buffalo Bills and eight seasons with the Cincinnati Bengals.