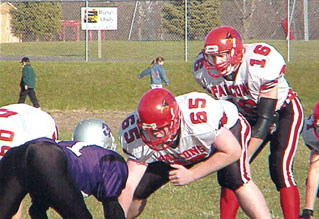 Jim Leonhard (#16 pictured) is one of the most famous examples of the Wisconsin work ethic and a perfect representative for the most outstanding senior defensive back award. Growing up in tiny Tony, Wisconsin and attending Division 7 Flambeau High School, Jim did not get a lot of exposure to many people throughout the state. Not that he wasn’t putting up impressive performances. Jim was a two-time all-state selection and ranks 14th in state history in points scored while sitting in a tie for 6th in interceptions. He walked on at the University of Wisconsin, and quickly earned time with his strong work ethic and outstanding athletic ability. He would be named a starter heading into his sophomore year and started the final 39 games of his illustrious Badger career. Leonhard intercepted 21 passes in his career, tied for the most in UW history and fourth in Big Ten history. He also broke the Big Ten’s career punt return yardage record while returning three punts for touchdowns. He was named the team’s MVP his senior season after recording 12 interceptions and 120 tackles.

Despite this, Leonhard went undrafted in 2005 as teams worried about his small size. He signed on as an undrafted free agent with the Buffalo Bills and continued his underdog story. He saw action in 10 games his first year, and 15 his second season, including his first career start. Leonhard moved to the Baltimore Ravens in 2008, and was a significant contributor on the league’s 2nd ranked defense, moving into a starting role in Week 3. Following the season Jim was rewarded with a multi-year contract by the New York Jets and would go on to play for the Broncos, Saints, and Browns as well in a 10-year NFL career. He returned to his alma mater to become an assistant coach for the Badgers in 2016.

Jim has chosen to support Teammates For Kids, a part of the Garth Brooks Foundation. Through a team built with integrity and in partnership with professional athletes, celebrities, organizations, and fans, the Teammates for Kids Foundation exists to develop and implement innovative concepts that generate funds for the benefit of children's charities. The purpose of the Foundation is to contribute financial resources to selected nonprofit organizations that effectively serve and benefit children with an emphasis on health, education, and inner-city services.