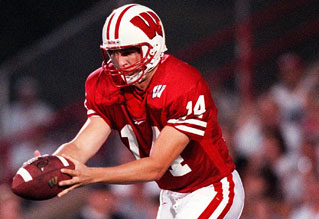 Kevin Stemke was one of the first state of Wisconsin specialists to get national attention, and the state’s players have benefitted ever since. As such, he is an appropriate representative for the most outstanding senior kicker/punter award. Kevin attended Green Bay Preble High School, and after being one of the top specialists in the country chose to stay home and play for the University of Wisconsin Badgers. It didn’t take long for Stemke’s exploits to get noticed. He set the Badger punting record as just a freshman in 1997 when he averaged 43.9 yards per kick. He was a 2nd team all-Big Ten selection that season and finished 13th nationally. His sophomore season he was a consensus 1st team all-Big Ten selection after leading the Big Ten Conference in punting.

While his punting average his junior season was down slightly, Stemke set a personal best with an 86 yard boot against Michigan State. And his net average was actually higher than his first two seasons as few opponents were able to muster returns. This all led up to his senior season when Stemke broke his own school record by averaging 44.5 yards per punt, the third best mark in the country while his 42.5 net average was tops. After the season Stemke was presented with the Ray Guy Award as the nation’s top punter. Kevin also holds UW records for highest punting average in a career (43.5) and total punting yards (10,660).

Kevin has chosen to support the Juvenile Diabetes Research Foundation. The mission of JDRF is to find a cure for diabetes and its complications through the support of research. Since its founding in 1970 by parents of children with type 1 diabetes, JDRF has awarded more than $1.3 billion to diabetes research, including more than $156 million in 2008. In 2008, the Foundation funded more than 1,000 centers, grants in laboratories, hospitals, and industry, and fellowships in 22 countries.