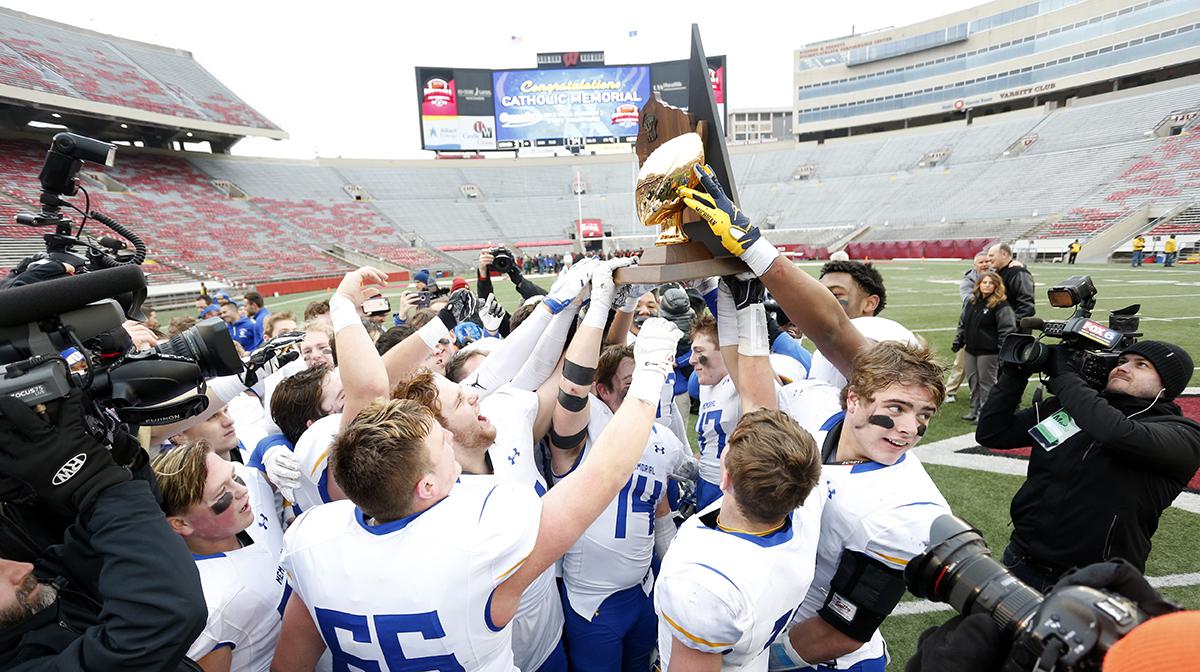 Catholic Memorial is looking for a second straight title, this time in Division 4

Last week I went 11-4 in picking the state semi-final and 8-player championship contests, giving me an overall record of 174-51, good for a 77.3% prediction rate. Here's my picks and breakdown of each of the state title contests.

Bay Port finally broke through to a state championship game after so many close calls and outstanding teams over the years. Head coach Gary Westerman's club ended Kimberly's run of six straight state championship game appearances with a convincing 42-28 win last week. With WFCA Offensive Player of the Year Isaiah Gash and three other First Team All-State selections, the Pirates are loaded with talent up and down the roster. They'll look to slow down the Wing-T offense of defending champion Muskego, which broke out in the semi-finals against Madison Memorial after a couple low-scoring games. Unfortunately for the Warriors, it looks like they'll be without one of their key offensive weapons after running back Andrew Leair suffered an injury late in last week's game.

In a division we thought was going to be so wide open and unpredictable and turned out to be exactly that, perhaps we should have seen this matchup coming, as 2016 champion Brookfield East faces 2017 winner Waunakee. This has to feel a lot like deja vu for Brookfield East, who in both 2016 and 2019 had some stumbles in the regular season but would beat a North Shore Conference team in Level 1 followed by wins over Brookfield Central and Menomonee Falls with a Level 4 win over victory against a Big Rivers team. Like 2016, the Spartans play a Badger Conference team in the championship game. Donavan Hunt is playing the Sam Santiago-Lloyd role this year. Waunakee has dealt with a number of injuries, especially at the skill positions, but after a stretch of struggles late in the year and early in the playoffs, the Warriors have looked like the Waunakee of old the last two weeks in impressive wins over Hartford and Waukesha West.

Menasha vs DeForest, Friday 10 am

In 2014, Menasha went for two late against Homestead with a trip to the state finals on the line and converted. Five years, later, the Bluejays faced the same choice and made the same conversion to beat Menomonie. Menasha is playing with a ton of confidence after wins over powerhouses West De Pere and Menomonie. DeForest was in its first real dogfight of the season last week, and the Norskies showed they're up to the challenge, picking off New Berlin Eisenhower twice in the final three minutes to hold on for a 14-9 win.

Catholic Memorial has done exactly what we expected them to do after dropping down to Division 4, dominating the opposition with four wins by at least 33 points. The Crusaders has an incredible array of talent, and it is hard seeing a path to victory for Kiel in this one, despite the Raiders entering undefeated on the season. Head coach Mike Dressler has been coaching for four decades and will have some things in play to put the team in a good position, but they'll have to play flawlessly and work for turnovers to stay in this one.

Stratford finally allowed its first points of the season last week after 12 straight shutouts, but despite a third quarter deficit, the Tigers came back to claim a 19-6 victory over Amherst. The Tigers are posting historic numbers on defense, with a front seven that is as big and talented as any we have seen in the small schools. Lake Country Lutheran's defense has been outstanding as well, as the Lightning have allowed just 12 points in four playoff games. Quarterback Luke Haertle will need to make some big plays, which he is certainly capable of doing, if he gets time.

A rematch of the 2012 Division 6 state title game, that one went to Springs by a score of 24-12, despite 325 rushing yards by Regis. Neither team has changed much in what it does, with Regis looking to utilize a balanced rushing attack in its double wing offense. Springs will run the veer, be physical, and play tough defense, though they aren't quite as versatile or explosive in the passing game as some years past.

A rematch of last year's state championship game, when both teams had numerous mistakes, but Black Hawk got its act cleaned up en route to a 22-15 win. Edgar had five fumbles (three lost), muffed a punt but fell on it, turned the ball over on a failed fake punt, and dropped a pair of open passes that would have resulted in first downs. The Wildcats were limited to minus-10 yards of offense after the first quarter and still had a shot to tie the game late. It is hard to see either team being as sloppy this year, but it very likely will come down to which team takes care of the football the best.