Here are the Wisconsin Sports Network weekly award winners in boys' basketball for the games played November 26 through November 30: 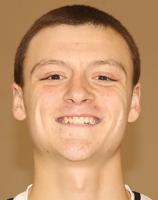 Jacob Ognacevic, 6-8, Sr., Sheboygan Lutheran
Coming off a remarkable junior season in which he averaged 30.5 points and 15.5 rebounds while helping Sheboygan Lutheran to a 27-2 record and the WIAA Division 5 state championship, Ognacevic opened his senior campaign in style. In a matchup of preseason top 10 teams at the Division 5 level, Ognacevic went for a career-high 45 points while also grabbing 18 rebounds and blocking two shots to help Sheboygan Lutheran turn back visiting Hustisford, 92-55. Equally comfortable posting up in the lane and scoring with his back to the basket or stepping outside and making perimeter shots, Ognacevic connected of 15 of 23 shots from the floor, including 3 of 4 from three-point range. The NCAA Division I recruit for Valparaiso University also made all six of his free-throw attempts. One of several strong candidates for the Wisconsin Basketball Coaches Association Mr. Basketball award, Ognacevic has scored 1,522 points during his high school basketball career.

East Troy
The Trojans started off the 2019-20 season in extremely impressive fashion, posting victories over Milwaukee Vincent and Pewaukee at the Tim Reuter Showcase at Pewaukee High School. East Troy defeated Milwaukee Vincent 93-67 on Friday evening behind 21 points and 15 rebounds from senior forward AJ Vukovich (6-5), a four-year varsity performer and University of Louisville baseball recruit. Senior guard Quinten Lottig (5-10) chipped in 16 points and Delavan-Darien transfer Collin Terpstra, a 6-foot-3 sophomore, contributed 14 points. On Saturday, the Trojans held off a late Pewaukee rally to notch a 73-71 triumph over the highly regarded Pirates. Vukovich continued his highly productive play by scoring 28 points and snaring 13 rebounds. Lottig made 7 of 8 shots from three-point range and scored 21 points for East Troy, which has won 159 games against just 46 setbacks during Daryl Rayfield's nine years as head coach. What makes the victories over Milwaukee Vincent and Pewaukee even more impressive for the two-time defending Rock Valley Conference champions is the fact sophomore Chase Cummings (6-3) played roughly half of each game while still recovering from an injury that cost him 10 pounds. The Trojans open Rock Valley Conference action Tuesday at Clinton.

Joe Konieczny, Columbus Catholic
Still a young coach in the eyes of many, Joe Konieczny posted his 300th career triumph on Saturday night as Columbus Catholic of Marshfield defeated Assumption of Wisconsin Rapids 58-41 in the latter's Cranberry Classic consolation game. Now in his 15th season at his alma mater after a couple of seasons as the head coach at Stratford, Konieczny has fashioned a 300-102 mark during his stellar coaching career. The Dons have won four titles in a row in the Eastern Division of the Cloverbelt Conference and have gone 63-1 in league games during that time span. Konieczny has his work cut out for him this season, though, as Columbus Catholic must replace five starters from a club that went 26-3 and lost to Sheboygan Lutheran in the WIAA Division 5 state-title game last March. Junior sharpshooter Wyatt Drexler (6-3) appears to be up for the challenge of taking over some of the scoring load as he made 12 three-point shots and scored 46 points in two games at the Cranberry Classic. He had six triples and 18 points in a two-point loss to Port Edwards and then had 28 points and six threes in the win over Assumption.