What Might Have Been: 10 Storylines COVID-19 wiped out from WIAA girls' state tournament 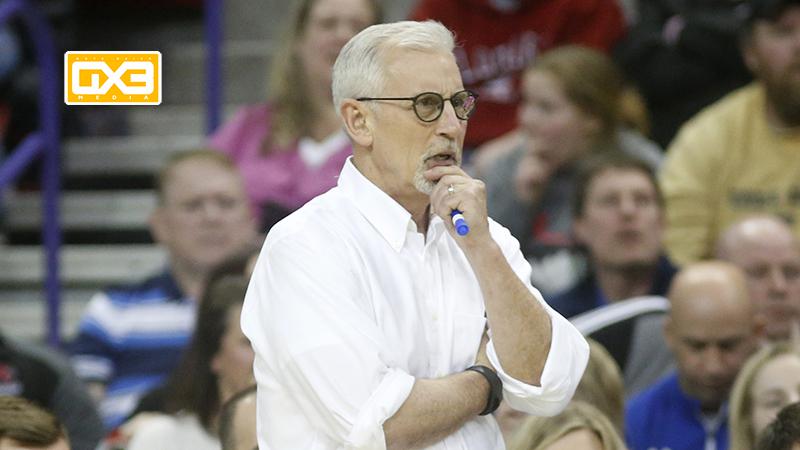 Middleton head coach Jeff Kind, who was looking to guide his squad to their first Gold Ball in program history

The abrupt end to the winter sports season has left us thinking about what might have been.

WSN Boys Basketball editor Mark Miller wrote about 10 storylines that were wiped out by COVID-19, and now it's time to take a look at what might have been at the girls' basketball state tournament.

The Division 3 and 4 teams that qualified for the state tournament were able to get their state semifinal games in before the WIAA canceled the rest of the tournament.

Below are 10 storylines that might have been from the girls basketball state tournament.

Middleton was making its 12th WIAA State tournament appearance, all under the leadership of WBCA Hall of Fame coach Jeff Kind. This year might have been the year for Cardinals and coach Kind to finally capture the elusive Gold Ball. Middleton was 25-1 entering the state tournament, ranked No. 1 in the final WSN Coaches Poll, and were the top-seed at the state tournament. Led by senior Sitori Tanin, a Loyola University Chicago signee, who averaged 14.9 points and 11.1 rebounds per game, the Cardinals were poised to take home the Gold Ball. Middleton was scheduled to play four-seed Oconomowoc (1st state appearance), with defending state champion Bay Port playing DSHA in the other D1 state semifinal. Coach Kind has compiled a 623-269 career record, including 469 wins as the head coach at Middleton. Four of the trips to state resulted in a state runner-up finish, including last season when the Cardinals lost to Bay Port. 50-49, on a last second basket by the Pirates' Emma Nagel.

Repeating as state champions is never an easy feat, but it's especially difficult when you when you deal with an injury to star player during the season. Bay Port, the defending Division 1 state champions, was ready to compete for another Gold Ball despite the early season loss of senior Emma Nagel, who made the game-winning basket in last year's title game. Bay Port was scheduled to face DSHA, a team they beat earlier in the season, in a state semifinal. Coach Kati Coleman's squad, led by senior sharp-shooter McKenzie Johnson (13.6 ppg, 76 3PM), appeared to be destined for a meeting against Middleton in the title game for a second consecutive season. Other key players for the Pirates were sophomore Emma Krueger, and seniors Mady Draak (Michigan Tech signee), Alaina Abel (Loyola Univ. Chicago soccer commit) and Raegan McIntyre. 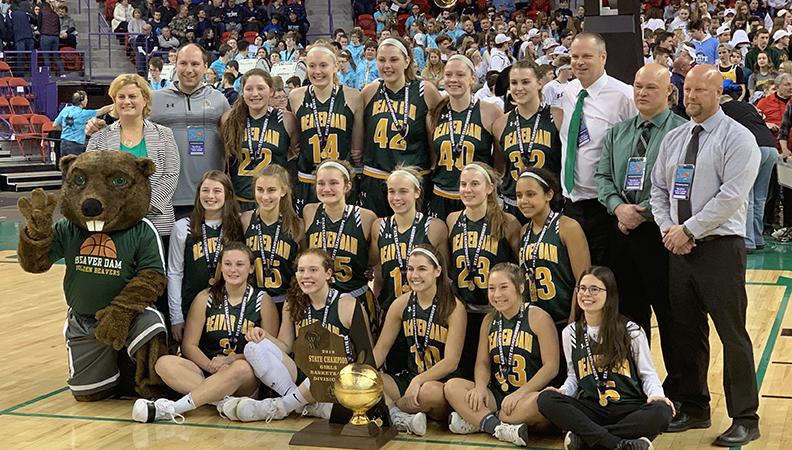 No team in girls' basketball state history has won four consecutive state titles. Beaver Dam was trying to become the first team to achieve that feat until the cancelation of the tournament. The Golden Beavers were the three-time defending Division 2 state champions and were scheduled to play Pewaukee (1st state appearance) in a state semifinal. Beaver Dam had lost just one in-state game, which was against Aquinas and the same week coach Tim Chase took a leave of absence to battle colon cancer. Coach Chase returned to the team as head coach for their regular season finale against Reedsburg. The Golden Beavers, led by junior Maty Wilke and senior Jada Donaldson, were ready to compete for a fourth consecutive Gold Ball until the tournament was canceled. Other key players on the team included juniors Natalie Jens, Paige Hodgson and Avery Stonewall, and senior Carley Burchardt (Bryant & Stratton commit). Beaver Dam had posted a 103-6 record over the past four years; the only in-state loss was against Aquinas this season, which ended a 87-game winning streak against Wisconsin teams.

Beaver Dam vs. Hortonville in the state title game

A potential meeting between three-time defending Division 2 state champion Beaver Dam and Hortonville in the title state title game was a much talked scenario that didn't get a chance to happen. Hortonville had lost in a state semifinal in each of the past three seasons, including the last two against Beaver Dam, and were poised to make this matchup different. The Polar Bears entered the state tournament riding a 25-game winning streak, dropping their season opener against Bay Port, the defending Division 1 state champion. Coach Celeste Ratka's squad featured Milwaukee commits Macy McGlone and Kamy Peppler, along with additional key players in junior Lexi Day, and seniors Morgan Draheim and Aliyah Schmidt. Hortonville had the pieces to end Beaver Dam's state title streak and bring home its first Gold Ball, but we instead can only think about what might have been.

Platteville was looking to become the first Division 3 team to complete a perfect season since 2015 when Whitewater took home the Gold Ball with a 28-0 record. The Hillmen topped Arcadia, 48-45, to advance to the state championship game to play Wrightstown before the cancelation of the state tournament. Platteville only previous trip to state resulted in the Class B state title with a 23-2 overall record. Coach Mike Foley's squad was led by seniors Sami Martin (Bradley Univ. signee) and Josie Nies (UW-Stevens Point commit), who were in position to take home the program's second Gold Ball. Other key contributors for the Hillmen included seniors Becca Hoyer (UW-Platteville commit) and Izzy Carroll, and freshman Camryn Nies.

Wrightstown had made three previous trips to the state tournament, but were in search of its first Gold Ball in program history. The Tigers were my pick to win the Division 3 state title prior to senior Bridget Froehlke's torn ACL the week of the state tournament. Her teammates got the job done in a state semifinal, defeating Lake Mills, 62-54, behind a big game from sophomore Leah Lemke, who took over as the Tigers' lead ball-handler and playmaker after the Froehlke injury. Other key players for coach Mike Froehlke and the Tigers included seniors Ella Diny (Cardinal Stritch signee) and Meghan Rhia (Ripon College commit), and 6-foot-2 freshman Jordan Vickman. Wrightstown, despite the injury to Froehlke, was ready to battle undefeated Platteville in the state championship game.

Aquinas going for a three-peat

Aquinas was looking to join Beaver Dam (2017-19), Cuba City (2005-07), Flambeau (2006-08), Milwaukee Vincent (2007-09) and Milwaukee Washington (1994-96) on the list of teams to win three consecutive state championships. The Blugolds' only loss this season was against Hopkins, Minn., who was undefeated the past two seasons in the largest division in Minnesota. Aquinas defeated Crandon, 73-42, in a state semifinal and were set to matchup against Melrose-Mindoro in the state championship game for the third consecutive season. Senior Lexi Donarski, an Iowa State signee and Miss Basketball award-winner, led Aquinas to four trips to state. Other key players for coach Dave Donarski and the Blugolds included seniors Taylor Theusch (Minnesota State signee) and Kayla Bahr, sophomore Jacy Weisbrod and freshman Macy Donarski. Despite senior Courtney Becker, a Drake University signee, not being available, the Blugolds fast-paced game that featured strong defense and excellent three-point shooting, led them to 75 consecutive wins over in-state opponents following their win over Crandon in a state semifinal.

Aquinas vs. Melrose-Mindoro round three in state title game

The teams were set to meet for a third consecutive time in the Division 4 state championship game before the state tournament was canceled. The previous two meetings were won by Aquinas by scores of 68-52 in 2018 and 65-39 in 2019. This matchup could have been different for Melrose-Mindoro if they were able to control the tempo of the game and utilize the height advantage they had with South Dakota State signees Mesa Byom (6-3) and Emily Herzberg (6-0), while Aquinas was playing without Courtney Becker. Slowing down Miss Basketball award-winner Lexi Donarski was going to be no small task for the Mustangs, but the guard play of senior Calette Lockington (Viterbo Univ. signee) and junior Teagan Frey would have important for them to make this meeting different. Melrose-Mindoro had posted a 103-5 record over the past four years, with its only losses coming against Aquinas and Black Hawk, giving them plenty of experience in big games and a hunger to get past Aquinas after having its season end against them the previous three seasons.

Black Hawk was set to enter the state tournament with a 54-game winning streak, the state's longest active streak. The Warriors went 103-2 over the past four seasons with three trips to the state tournament. Their only losses were against Fall River (67-62 OT) in a regional final in 2016-17 and Bangor (39-29) in the Division 5 state championship game in 2017-18. Black Hawk's resume included notable wins over Marshall (74-51), Madison La Follette (62-44) and Melrose-Mindoro (78-62) during the 2019-20 season. The Warriors' combination of smothering defense and scoring weapons on offense made them the clear favorite in Division 5. Seniors Hannah Butler (UW-Platteville commit) and Natalie Leuzinger (Wisconsin walk-on), and junior Bailey Butler (Green Bay commit) highlighted the attack for coach Mike Flanagan and the Warriors. The trio combined to average over 50 points per game, while senior Maddy Huschitt, junior Kaylee Marty and freshman Tara Wellnitz were among others who played supporting roles. Black Hawk's path to a repeat Division 5 state title was first to beat Newman Catholic, a team they defeated two years prior in the state tournament, and then a potential meeting against Clear Lake, an undefeated team entering the state tournament.

The matchup that might have been in the Division 5 state championship game. Defending state champion Black Hawk, riding a 54-game winning streak, against undefeated Clear Lake. The Warriors from Clear Lake also went undefeated in the volleyball season, capturing the Division 4 state title, and were looking to get a chance at Black Hawk. Despite both teams not losing a game this season, Black Hawk was the clear favorite, but if Clear Lake was going to pull the upset, they could look back two years earlier at Bangor's state title two years earlier. Clear Lake didn't have an Emma Wittmershaus like Bangor did, but they did have a couple 6-footers in Julianna Rosen and Maddie Rosen that could have caused some problems for the Warriors from Black Hawk. The play of guard Madison Zimmer would have also been a key piece in Clear Lake's quest for a Gold Ball. Another what might have been to an abrupt end to the girls' basketball season.