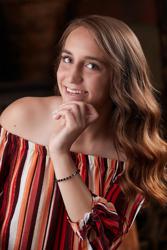 Favorite Sport (and why): "My favorite sport would probably have to be basketball, because it is very different from track and cross country. It has many different aspects or skills than just running. In addition, it definitely has more of a team atmosphere."

Best Advice from a High School Coach: "The best advice I have ever received from a high school coach would be a very common saying “just have fun” because that's truly what it's about. You are doing the sport because you enjoy it."

Best Part of Playing Three Sports: "I love playing three sports, because it taught me so many things. I learned how to make the most of my time and prioritize. I worked hard and was dedicated during the season and in the summer, but it was worth it. I also got to meet so many people and make a lot of friends throughout the years that still remain close to me."

Toughest Part of Playing Three Sports: "Sports has lots of ups, but with that comes downs. I think the toughest part about playing three sports would be all the time and dedication put into them because of the love and drive I had towards them to do well. In other words, I loved participating in them so much that it caused a lot of stress and pressure especially as school or grades were also very important. When a big project or test was at the same time as a competition, some nights got pretty tough and rough."

Favorite Opponent (and why): "My favorite opponent to play against in basketball would be Auburndale, because the games were always so close and super competitive. Most of the time the outcome of the game wouldn’t even be determined until the last shot because the score was always so close. When we were younger, I remember tournaments always coming down to Edgar vs Auburndale, too. Many games would consist of overtimes or be won by only one point. We would push each other to improve and do better."

Favorite Professional Team: "I have multiple favorite professional teams, but the Green Bay Packers would probably be my favorite football team."

Favorite Professional Athlete: "Since the Green Bay Packers are my favorite professional team, I have to say my favorite professional athlete would be Aaron Rodgers. In fact, I got to meet him because I won an award for cross country and he presented it to me. He also gave me an autographed football, talked to me for a while, and took a picture with me at the awards ceremony. I was actually kind of scared at first because I was just a small high school girl, but he was very nice but bigger than I expected."

Favorite College Team: "My favorite college team would have to be the Wisconsin Badgers for basketball because they are just so fun and enjoyable to watch."

Toughest Individual You’ve Competed Against (and why): "The toughest individual I have competed against is hard to answer because there are so many strong women who give their heart out in sports. The person who really pushed me in running and made me feel so tired in meets when we ran against each other is Savannah Schley. We have ran against each other periodically since middle school, and you could always tell we both wanted to win so badly that the races would always end so close. But no matter what the outcome of the race was, we both pushed each other and had fun doing it."

Most Admired High School Teammate (and why): "My most admired high school teammate would be MaKenna Guden because even though she is a year younger than me, she has really taught me so much about sports and life in general. Makenna works extremely hard at everything she does and it definitely shows. She is not just amazing in sports and school, but she is a great friend as well. MaKenna is a major reason why leaving my small and loving town for college is going to be so hard, because of the love I have for her and the memories we have made with each other."

College Plans: "I plan to run cross country and track at Minnesota State University - Mankato and get an elementary teaching degree."

Activities Outside of Sports: "I am involved in a lot of activities outside of sports like snowmobiling, going to our cottage, skiing, tubing, volunteering especially with younger students through church activities such as VBS and CCD, babysitting, working, doing things on my phone, and spending time with my family and friends."

I Find it Relaxing to: "I find it relaxing to go for a jog, because it gives me a break to just think about things and clear my head."

Favorite Movie: "I like a lot of different movies, but my favorite would probably have to be any in the Fast and Furious series."

Favorite Subject: "My favorite subject is definitely math, because I feel that I am good at it. I don’t really have to spend time studying for it, because it is one of those subjects that you just get and understand or you don’t. All you can really do is practice problems. I also really like my teacher for Math, so that helps me enjoy the subject more too."

Favorite Restaurant: "My favorite fancy restaurant would be Olive Garden, because everything is so good especially the bread sticks. Another maybe a little cheaper restaurant that I really like Noodles in Company, because all runners love pasta."

Favorite Website: "Shopping wise, my favorite website would be Shein because it has a lot of cute clothes for super cheap. Overall, the website that I definitely go on the most would for sure be athletic.net with no doubt because it's just a habit to check out."

Other Family Members: "My mom's name is Karen, my dad's name is Ryan, and I have one older brother named Hunter."