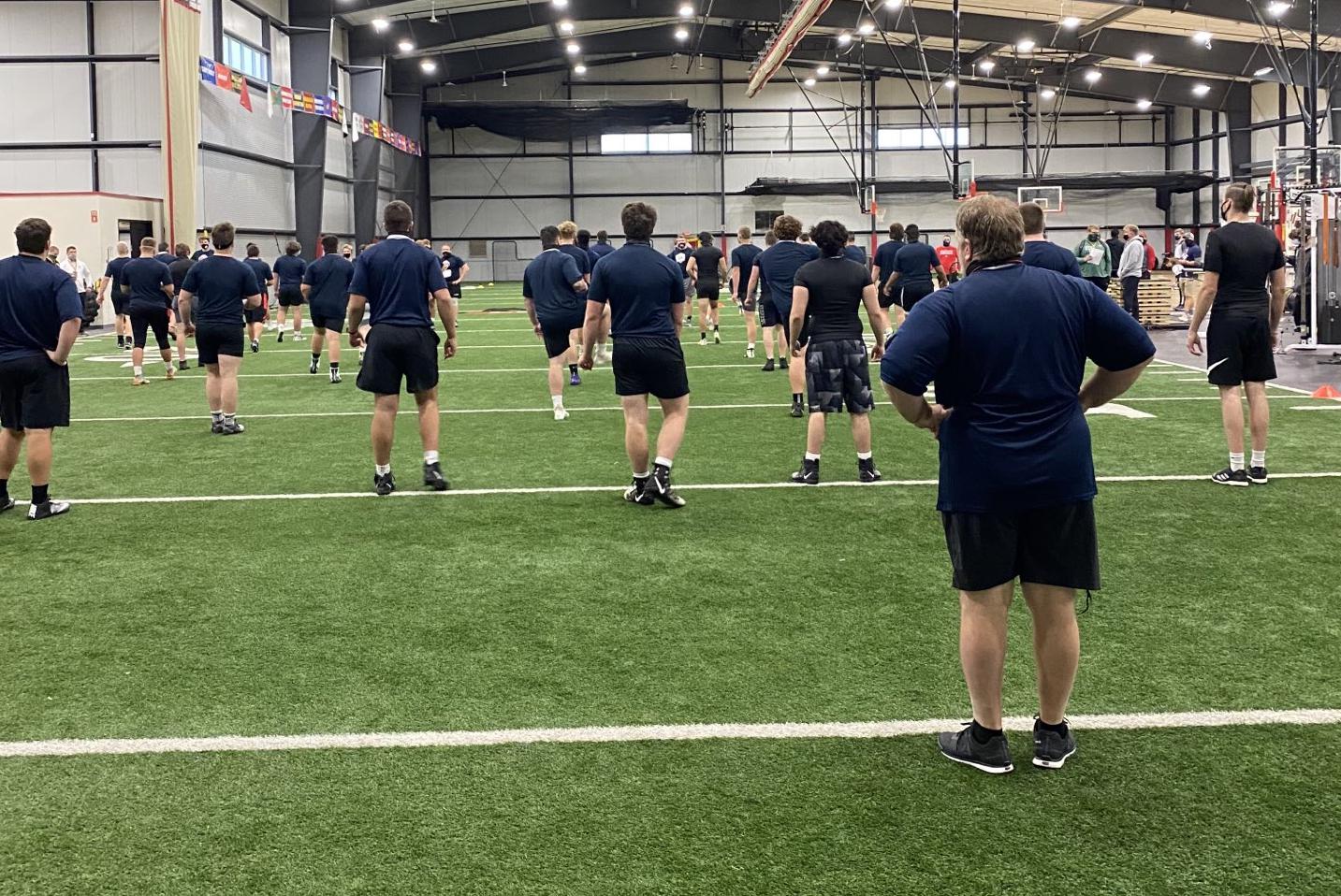 The WFCA Fall Combine was held over the weekend, and full results are now available. The Combine was split into three sessions, though all athletes were tested on the same events. All events were held at the new indoor facility at NX Level Fitness in Waukesha. A total of 181 athletes competed in the Combine.

The WFCA Combine was conducted by NX Level staff with many high school football coaches assisting, and sponsored by the WFCA, NX Level, BSN Sports, and WisSports.net. Special thank you to WFCA President Tony Biolo and Fall Combine Director Mark Krommenacker for organizing the event and compiling the results as well as Brad Arnett & crew at NX Level, plus the WFCA members that worked the Combine.

More than a dozen college coaches were on hand with several programs sending multiple coaches to evaluate potential prospects. NCAA rules prohibited Division 1 coaches from attending. Space limitations and social distancing requirements limited the number of coaches that each school could send.

There were some blistering times posted in the 40-yard dash Saturday afternoon, which was done via hand-timing by the professionals from NX Level.

Kirchberg also posted the best vertical jump at 38 inches. Waunakee junior defensive back Caden McCurdy was next at 37 inches. Magli, who showed up near the top of numerous result lists, posted a vertical jump of 36.2 inches, while Sparta senior Abram Edie had a mark of 35.3 inches.

Three players best 10 feet in the broad jump. DeForest's Devin Magli was tops with a leap of 10'3". Next was Stoughton junior linebacker John Harman, who went 10'1". Trace Kirchberg finished at 10-feet exactly.

De Pere's Maddax Shinners was fastest in the L-Drill, which measures speed, agility, bend, and body control. He posted a mark of 6.72 seconds. Next was Milton senior quarterback Evan Jordahl at 6.77 seconds, while Sparta receiver Abram Edie was close behind at 6.78 seconds. A total of 20 players went under seven seconds in the event. The heaviest among the group was Lomira senior running back Abram Helsell, who measures in at 5'10.5" and 210 pounds, running a 6.97 second time in the L-Drill.

The shuttle or pro agility is another outstanding change-of-direction test, with athletes starting from a stop, running five yards in one direction, ten yards the other direction, and five yards back to the center. College coaches lined up around the testing locations all day, as it is one of the most beneficial events for seeing how players move, bend, and control their bodies.

In the Shuttle event, the top time went to Waunakee junior defensive back Caden McCurdy, who posted a blazing mark of 4.06 seconds. Next was Pulaski junior running back Aaron Maroszek with a time of 4.15 seconds, followed by Carter Fonger of Superior, who went 4.16 seconds.

Players also tested in the bench press, with 2021 prospects repping at 185 pounds, 2022 prospects at 170 pounds, and 2023 prospects at 155 pounds. The top mark by a senior athlete was shared by Black Hawk/Warren defensive lineman Skylar Neff and Waunakee offensive lineman Thomas Meffert, who lifted 32 reps of 185 pounds. Stevens Point linebacker Cameron McCarrier was close behind with 31 reps.

Among Class of 2022 prospects, Stoughton's Gabe Rousseau had the most reps of 170 pounds, putting the weight up an impressive 37 times. Waunakee linebacker Tommy Raemisch was tops among Class of 2023 players with 26 reps of 155 pounds.

Please note this is just some of the top marks for each event. With 181 athletes competing, it is difficult to mention all of the standouts from the Combine. Full results can be found below.

All results are sorted by grade, then by Last Name. You can re-sort the results by clicking on any of the column headings. Please note you will need to scroll right to see results for all tests.

All height measurements were taken in bare feet.