Mike Gnewuch of Mukwonago selected as Packers Coach of the Week 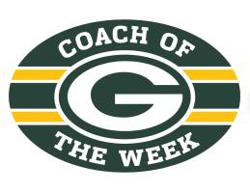 The Packers have announced that Mike Gnewuch of Mukwonago High School in Mukwonago, Wis., has been named the Green Bay Packers High School Coach of the Week.

Gnewuch, in his third year as head coach of the Indians, has his team at 3-2 this season. They look to bounce back from a tough loss against defending Division 1 State Champion Muskego High School when they take on D.C. Everest on Friday, Oct. 30. In addition to coaching at Mukwonago, Gnewuch is also a physical education teacher at the high school. Prior to his arrival to the program in 2018, student athletes had to come in at 6 a.m. during the school year to lift weights and get their workouts in prior to class. Gnewuch proposed instead offering a strength and conditioning class as part of the physical education curriculum for all student athletes at the school, not just football players. Student enrollment in the class continues to increase each year since its initial offering.

“Our numbers are growing significantly since I’ve been here at Mukwonago,” said Gnewuch. “We lift during the school day; I train them all so coaches can just focus on their sports and their skills during the practice sessions rather than taking extra time to bring them in before school or using extra practice time for them to lift. Our administration has been so unbelievably supportive in helping get that started. It takes a huge load off parents, especially for the younger kids who don’t have drivers licenses yet. They don’t have to worry about getting their kids to school so early in the morning. I think that kids today are getting pulled in a million different directions. I’m a huge advocate of multi-sport athletes. Every one of our football players is a multi-sport athlete; they don’t just play football. I tell the kids, ‘Go and compete in something else, don’t just play football year-round.’”

Gnewuch graduated from Luther Preparatory School in Watertown, Wis., in 1994. Throughout high school, he participated in football, wrestling and baseball. He played linebacker and running back under two Wisconsin Football Coaches Association Hall of Fame Coaches, head coach Ron Hahm, and defensive coordinator Ken Taylor. Following high school, he went on to play football and baseball, and participate in track & field at Martin Luther College in New Ulm, Minn. He graduated from Martin Luther in 1998 and later received his master’s degree from UW-La Crosse in 2010. Gnewuch’s coaching career began as a graduate assistant coach for his college alma mater, Martin Luther College, from 1999 to 2000. He went on to become an assistant coach at his high school alma mater under former coach Ken Taylor in 2001 and took a position as an assistant coach for Arrowhead High School in 2003. He remained at Arrowhead until 2012, when he took over as head coach for Fond du Lac High School. In 2018, Gnewuch became the head coach of Mukwonago.

Gnewuch was honored to win the Coach of the Week Award, but sees it as an award for the program, not just himself.

“It’s very humbling, because I know so many coaches around that are very very deserving. Also, I look at it as a staff award, because I have great men working with these kids every single day. They care about the kids deeply yet hold them accountable and teach them not only about the game of football, but about life skills. I’m the lucky one here and I get to be called the head coach, and receive recognition for it, but this is really a staff award. Even bigger, it’s an award for our community and high school and how our administration values kids and values athletics.”

Gnewuch and his staff oversee a program of 115 players with 85 suiting up for varsity games. His assistant staff includes David Adams, Jeremiah Chitwood, Josh Korth, Jordan Kroll, Justen Last, Martin Pepe, Bill Schmitz, and Jason Strickler. Gnewuch and his wife, Faith, have one daughter, Libby, and one son, Andrew.

The Green Bay Packers Coach of the Week program supports football outreach efforts by giving high school coaches the recognition they deserve. Nominations can be submitted by 10 a.m. every Monday to Ryan Fencl, Packers football outreach specialist, at coachoftheweek@packers.com. All nominations should include the nominee's name, address, school, phone number and reason he/she is deserving of the award. This year, because some schools have postponed their football seasons to the spring due to COVID-19, the Packers are seeking coaches to be nominated regardless of their teams’ on-field performance or whether they are playing in the fall or spring. Rather, the nominee could be honored for how they have turned programs around, how the team has impacted the community, or how the coach impacts the players and their families.