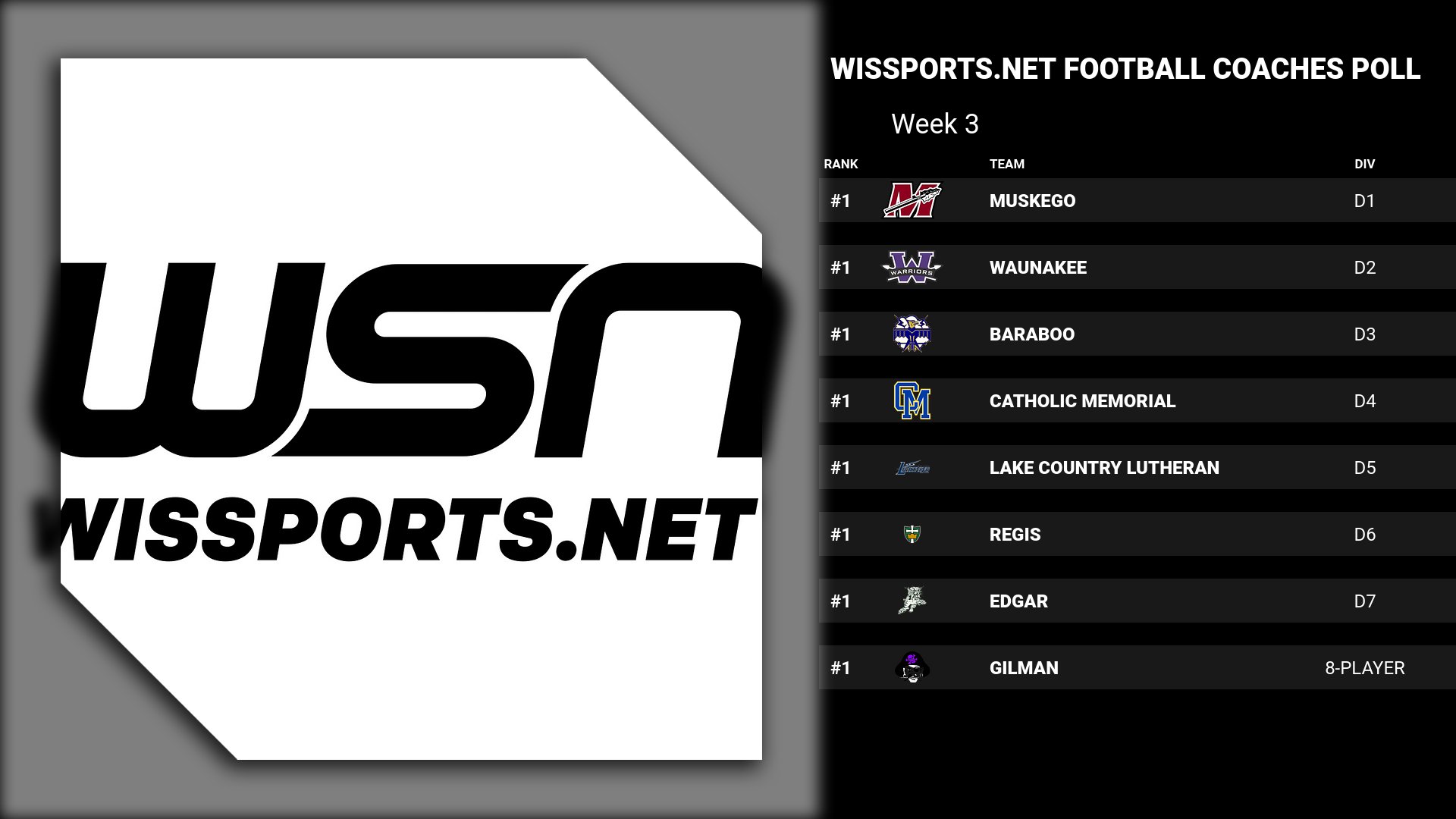 Muskego remains on top of the Division 1 Coaches Poll this week, as the Warriors extended their winning streak to 40 games. It remains close at the top, however, with both Franklin and Sun Prairie getting multiple number one votes, though Sun Prairie is actually still fourth in the poll after third-ranked Kimberly. Oak Creek enters the rankings after scoring 37 unanswered points in a win over Racine Horlick in Week 3.

Waunakee remains the top-ranked team in Division 2, with Homestead, Brookfield East, and DeForest following the Warriors. Wauwatosa West makes a big jump this week, as the Trojans' dominance continues. After putting up 90 points on Pius XI Catholic, Tosa West moves from eighth to fifth. Kaukauna went down to Appleton North, and the Ghosts fall from sixth to ninth. Cedarburg and Racine Horlick drop out, as Nicolet and Marshfield move in this week. It is quite the accomplishment for Nicolet, who has just one regular playoff appearance in school history, way back in 1989. An overtime win against Cedarburg last week was a monumental victory for the Knights.

Baraboo's run on top of the D3 rankings continues, as the Thunderbirds are ahead of Whitefish Bay, Greendale, Luxemburg-Casco, and Menasha rounding out the top five. No ranked teams suffered losses last week, and only a couple minor shuffling of spots took place.

Catholic Memorial continues to dominate the Division 4 Coaches Poll, as the top six from last week remain unchanged. Towards the bottom of the rankings, Freedom and Northwestern each move up, while Two Rivers and Little Chute drop out. New to the rankings are Berlin and Osceola.

The top team in the Division 5 WisSports.net Football Coaches Poll is once again Lake Country Lutheran, though the division is one of the deepest of any in the state. No ranked teams suffered defeats last week, though it was announced that Wittenberg-Birnamwood is forced to forfeit a Week 1 win over Northland Pines. The Chargers shutout Spencer/Columbus Catholic last week and moved up one spot to ninth.

The top six of the Division 6 Coaches Poll remains the same as last week, with Regis on top followed by Colby, Boyceville, Cuba City, Coleman, and Abbotsford. Losses by Shiocton, Waterloo, and Iola-Scandinavia dropped those teams out of the rankings. Moving in are Markesand, Mondovi, and Kenosha St. Joseph.

The top five in D7 is unchanged from last week, with Edgar again leading the way in the voting by a good margin. Bangor, Reedsville, Potosi/Cassville, and Hurley round out the top five. Johnson Creek is the only new team in this week's poll, as the Bluejays replace Turtle Lake at number ten.

Gilman continues to lead the way in the 8-player coaches poll this week. Newman Catholic is second, but former number three Belmont suffered a loss to Wisconsin Heights, as the Braves drop out of the rankings for now. Heights moves in at number ten.