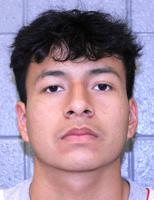 Making 12 three-point shots against a variety of defenses, Wisconsin Dells had little trouble in turning back Mauston Thursday night.

In a battle between two of the better teams in the South Central Conference, the Chiefs used a 10-0 run late in the first half and early in the second half to cruise to a 62-39 victory in a contest played in the beautiful new Wisconsin Dells gym.

Junior forward Jared Nevar (6-4) scored on a drive to the hoop early in the second half to cap the 10-0 run and give the Chiefs a 34-18 advantage. Mauston battled the rest of the way, but the Golden Eagles were never able to get their deficit under 10 points.

Wisconsin Dells assistant coach Mike Janke, filling in for head coach Brad Rohling who was attending to family matters, was pleased his squad got some baskets in the paint in addition to getting 12 triples.

"Sometimes we live and die with the three," Janke said. "Tonight, we made some deep shots, but we also were able to get some things in the paint."

Junior guard Damian Funmaker (6-0) was efficient in scoring a team-high 17 points for Wisconsin Dells, which improved to 2-2. Funmaker hit three triples, scored off the dribble and made some mid-range jump shots.

Junior forward Jack Field (6-4) also had a strong outing for Wisconsin Dells, finishing with 12 points and scoring in different ways just like Funmaker.

Defensively, Wisconsin Dells used its 1-2-2 zone defense to keep Mauston firing away from the perimeter. And the results were not pretty.

Mauston, which fell to 5-2, couldn't find the bottom of the net for long stretches of the contest.

In addition, Wisconsin Dells held senior Adon Saylor (6-0) scoreless until the 11:40 mark of the second half. Saylor came into the game averaging 22.5 ppg. He did finish with 11, but by the time he got going offensively, the game was all but settled.

"The defensive effort tonight was really good," Janke said. "Knowing where Adon was when he was out there was very important because he's such a good player."

Saylor has played against zone defenses set up to slow his drives to the basket in the past, but against Wisconsin Dells even his stellar passing skills weren't enough to keep his team in the game.

"Adon doesn't mind playing against zone defenses," said his father and coach, Gil Saylor. "He passes the ball really well and we got some good looks, but we just couldn't get the ball to drop. And when your shots aren't falling, that tends to affect your defense as well."

Sophomore Brock Massey (6-3) had 11 points for Mauston and he hit two triples early to keep the Golden Eagles close. But he couldn't get his shots to drop in the second half as the Chiefs maintained control.

"Wisconsin Dells is a good shooting team," coach Saylor said. "We talked about them getting maybe 10-to-12 three-point baskets. The trouble tonight is we also gave up points around the basket."