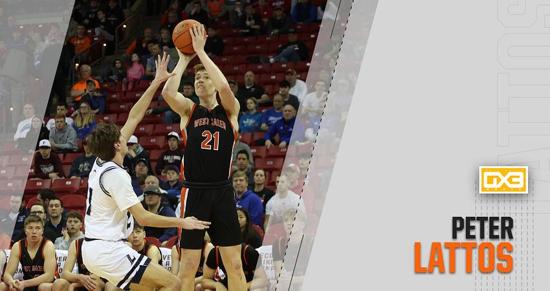 Three players from West Salem, the WIAA Division 3 state runner-up last March, were among the first eight players selected in the annual draft of campers at the Wisconsin Basketball Yearbook Exposure Camp at Viterbo University in La Crosse on Sunday.

Seniors Peter Lattos and Carson Koepnick, along with junior Tamarrein Henderson, impressed the camp staff with their play Sunday afternoon and evening and were among the top picks in the draft of more than 80 players.

Lattos, a versatile 6-foot-7 senior, was the first player selected in the draft for the second year in a row. He averaged 15.7 points per game as a junior and earned first-team all-Coulee Conference honors.

A potential scholarship player due to his size, strength and skill, Lattos helped West Salem to a 27-2 record a year ago and had 23 points and six rebounds in the Panthers' 67-56 loss to Lake Country Lutheran in the Division 3 title game at the Kohl Center in Madison on March 19.

Koepnick, an extramely skilled 6-foot-1 guard, led West Salem in scoring a year ago at 16.8 ppg. He joined Lattos on the first-team all-Coulee Conference squad.

Also a potential scholarship player, Koepnick is a terrific perimeter shooter, smart passer and a solid defender. He had six points and three rebounds in the title game against Lake Country Lutheran. He also had 26 points and eight rebounds in the Panthers' state-semifinal win over Brillion.

The third West Salem player selected in the first round of the WBY Camp Draft, Tamarrein Henderson, is beginning to emerge as one of the state's better prospects in the 2024 class.

Henderson is an athletic 6-foot-4 guard who can shoot from distance, get to the basket and finish or penetrate and find open teammates.

Henderson has grown a bit in recent months, has improved his outside shot and is becoming a true facilitator with the ball in his hands. Henderson, who transferred to West Salem after playing for the varsity squad at Sparta as a freshman, averaged 8.3 ppg as a sophomore at West Salem.