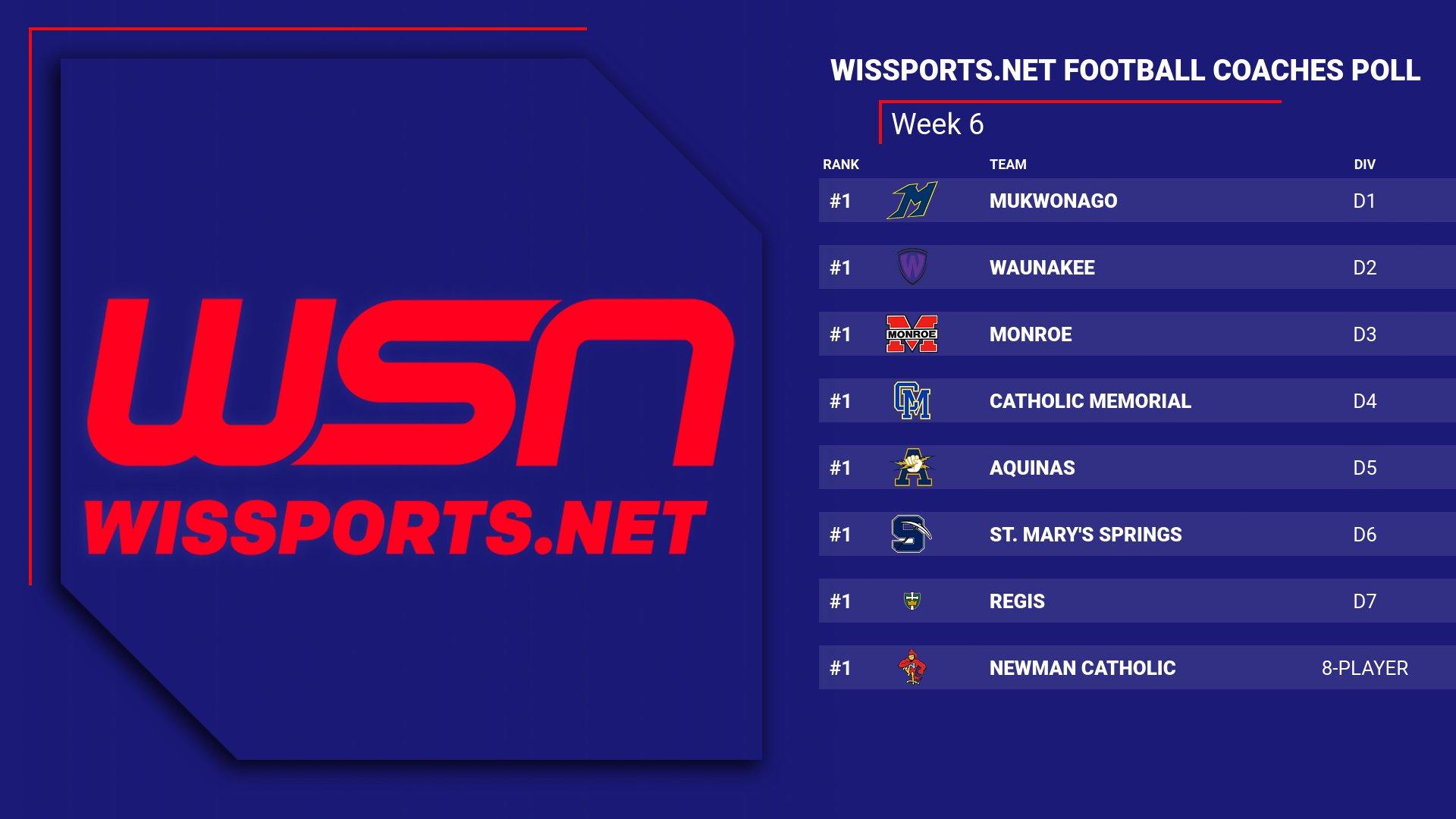 Mukwonago continued to do Mukwonago things, though the Indians had a nail-biter over Arrowhead in Week 6. Speaking of Arrowhead, the Warhawks drop two spots to sixth this week, as unbeaten Neenah makes a big jump from seventh to fourth. Oak Creek moves up from tenth to seventh after defeating rival Franklin, who falls to tenth this week. Sussex Hamilton went down to Marquette and the loss dropped the Chargers out of this week's poll, to be replaced by Hudson, who is now ninth.

Waunakee is first, with Sun Prairie East, River Falls, West De Pere, and Brookfield Central in the top five. Westosha Cental suffered its first loss of the year against Waterford and drops out of the poll, with New Richmond also falls out of the rankings. Coming in new this week are Kaukauna and Kettle Moraine at ninth and tenth respectively.

Monroe is still the top-ranked team in Division 3, but Onalaska scored a couple first place votes this week after a 35-0 shutout of former number seven Reedsburg, which dropped the Beavers to ninth. Rice Lake falls out of the top five, as the Warriors are now 4-2 following a loss to Ellsworth. New Berlin West is in the rare spot to move up in the rankings despite a loss, as the Vikings are up to fifth after several other teams around them also suffered losses. Mount Horeb/Barneveld makes a big leap into the coaches poll at number six.

Catholic Memorial is a unanimous top choice in the Division 4 Coaches Poll once again, followed by Columbus, Freedom, Ellsworth, and West Salem in the top five. Edgewood went down to Columbus in a running clock shutout and the Crusaders fall out of the poll. Berlin and Baldwin-Woodville are now tied for the tenth spot.

No losses by ranked teams last week and no changes in this week's rankings. Aquinas continues to lead the way in the WisSports.net Division 5 Coaches Poll, followed by a top five of Mayville, Brodhead/Juda, Northwestern, and Colby.

Most of the spots in the Division 6 rankings stay the same as last week, including Saint Mary's Springs in the top position. Bangor went down to Cashton, and the Cardinals drop one spot to tenth this week, with Stratford moving up to ninth. Third-ranked Mondovi has a big one this week against Division 7 top-ranked Regis for control of the Cloverbelt Conference.

A big game in the Six Rivers Conference results in a shakeup in the top five of the Division 7 rankings this week. River Ridge shoots from ninth to fourth after downing former number four Black Hawk/Warren (IL), who drops to tenth. Spring Valley enters the poll at number nine, as Randolph drops out after a second loss. Regis is a clear number one team in D7, though Cashton did pull a top vote this week as well after taking down Bangor.