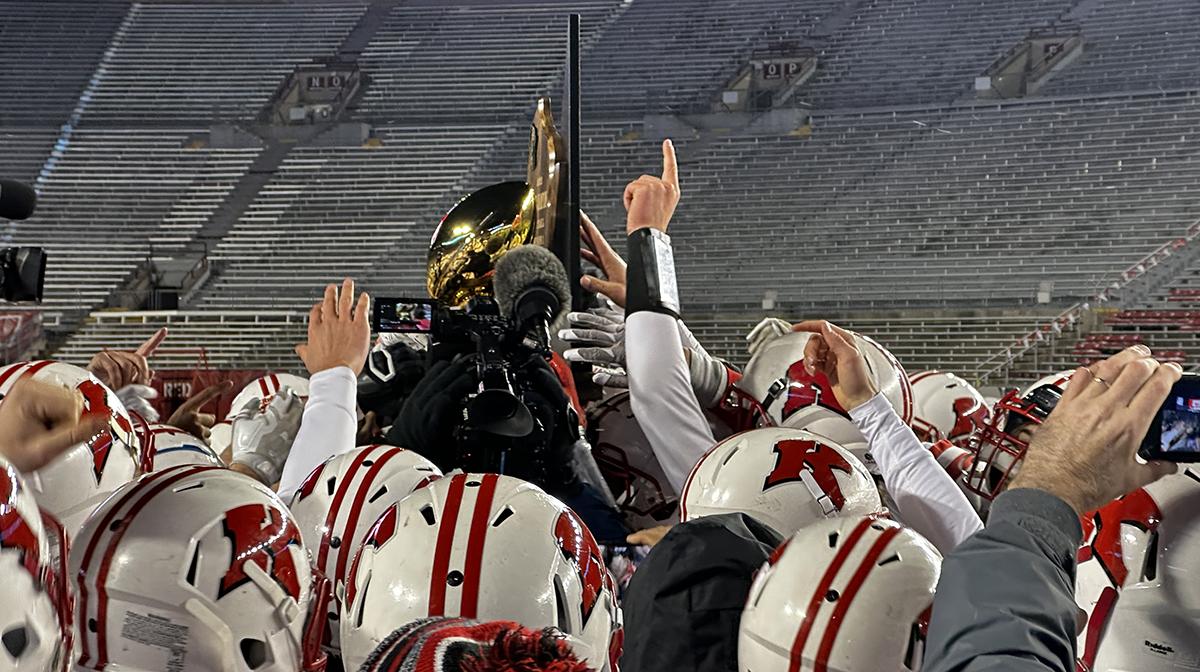 What a way to put a cap on two great days of football at Camp Randall Stadium in Madison, as Kimberly took a back-and-forth Division 1 title game over Mukwonago 34-30.

The Papermakers scored with just 26 seconds remaining to take the lead one final time, as running back Blake Barry powered in from five yards out for a touchdown.

Not counting a kneeldown at the end of the game after Thomas Meyers intercepted Evan Herbig to seal it, Kimberly scored touchdowns on all four of its second half drives, as it was just enough to out-dual the Indians.

The game got off to an inauspicious start for Mukwonago, who saw All-State running back Wynn Stang leave for good after just two carries. The Indians did score a touchdown on that drive, however, with quarterback Evan Herbig going in from five yards out.

Kimberly answered with a touchdown drive of its own, covering 11 plays, 63 yards and more than five minutes.

The only other first half score was by Mukwonago, who went on a 75-yard march capped by a Herbig one-yard plunge.

Mukwonago led 14-7 at halftime, but that just served as the appetizer for a tasty second half that included six lead changes. Kimberly running back Blake Barry had three short touchdown runs after halftime, as his physical running powered the Papermakers all night.

The teams were extremely evenly matched, and it showed not just on the scoreboard and in the line score, but in the box score as well.

The early injury loss of Stang, who entered with more than 2700 rushing yards, certainly had an impact on Mukwonago, who relied more on Herbig to run the ball from his quarterback spot. Sophomore Mason Radobicky stepped into a bigger role as well, rushing 13 times for 75 yards and just 14 carries the entire season coming in to the night. Herbig ran for 105 yards and three touchdowns while completing 14-of-18 passes for 131 yards.

Kimberly's Blake Barry finished with 184 yards and four touchdowns on 33 carries, while Seth Miron threw for 112 yards and a touchdown on 10-of-17 passing.

Kimberly wins its eighth WIAA state championship, all since 2007, with first year coach Chad Michalkiewicz becoming the third different head coach to lead the Papermakers to a title during that run, joining Steve Jorgensen (2007 and 2008 titles) and Steve Jones (2013-2018 titles).

It was quite a gauntlet run by Kimberly to win the title this year. In Level 1, the Papermakers faced the only team to beat them in 2022, getting revenge on Fond du Lac. Next was a one-point road victory over Neenah, who shared the FVA title with the Papermakers. Kimberly next went on the road to defeat defending Division 2 state champion Waunakee before dispatching unbeaten Bay Port in the state semi-finals. A win over Classic Eight co-champ Mukwonago in the title game was a nice capper to another incredible season for Kimberly.