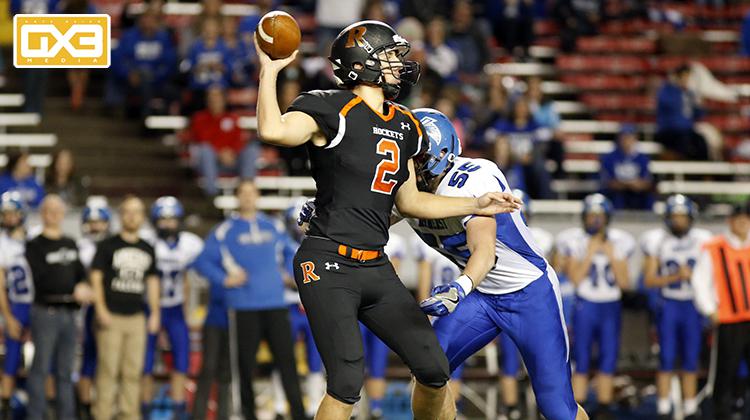 2016 was the Year of the Quarterback, with some impressive numbers put up by signal-callers throughout the state. It is not surprise that many of them re-wrote the Wisconsin Football Record Book, which has been compiled for many years by Kevin Patrowsky.

Before we get into some of the 2016 highlights, an awesome addition by Patrowsky this season is a listing of the yearly leaders in the major categories of passing yards, rushing yards, and receiving dating back 20-40 years depending on the category. Also, be sure to check out the Wisconsin Football Honors file, which includes archived info such as a 1993 All-Century Team from the Milwaukee Journal, players selected as All-Americans, and a review of some of the great teams in state history.

Please send any updates or corrections to Kevin Patrowsky.

Onalaska senior Brayton Duin wasn't even the full-time quarterback to begin the season, but he quickly grabbed the job and ran (or passed) with it. He became the second player to post a pair of 500-yard passing games in one season, including a 532-yard day that is fifth all-time. His seven touchdown passes in that game are tied for second. He nearly made it three, 500-yard days, coming up just short with 477 yards in a later game. Chetek-Weyerhaeuser's Dawson Davis also broke into the top 30 in single-game passing with a 467-yard performance.

The big story however was the season-long ridiculousness of Cedar Grove-Belgium senior Josh Weiss. In leading the Rockets to a runner-up performance in Division 5, he shattered many state finals records, and set new season records with 4,231 passing yards and an amazing 59 touchdowns.

Not to be outdone, Watertown's Dylan Fagerland posted the third-best yardage season with 3,550 yards, while Brayton Duin is now sixth with 3,427. Others with seasons that place them in the top 35 all-time include Lake Mills' Ben Dunkelberger (3,246), Monona Grove's Alec Ogden (3,074), and Oconomwoc's Ben Nienhuis (2,902).

On the career passing list, Weiss' 6,547 yards is good for 12th, with Nienhuis at #15 with 6,515 yards. Cochrane-Fountain City quarterback Tristan Schmidtknecht is also in the top 30 with 5,940 yards. Weiss' 83 career passing touchdowns is fourth.

As you can imagine, with all the huge performances by quarterbacks, the receivers did quite a bit of damage to the record book as well.

Conference foes Ryan Hayden of Watertown and Zach Clayton of Oconomowoc are tied with 95 receptions, placing eighth. Hayden has a slight edge in yards (1,620 to 1,524), as the duo is fourth and fifth respectively in that category. Clayton does own the record for highest receiving yards per game in a season with 152.5, followed by Hayden at 147.3. Weiss is fourth at 141.8. Onalaska's Jalen Sample is tenth with 1,408 yards and now tied for second with 22 receiving touchdowns.

Hilbelink's 166 career receptions is eighth, while his 3,079 yards and 35 touchdowns are third on the career list.

There were some impressive rushing performances this season as well, though some of them were turned in by players technically considered quarterbacks.

On the single-game rushing list, Baraboo fullback Noah Larson had 423 yards early in the season to place him 11th, while South Milwaukee quarterback Jake Simuncak posted 418 yards to slip into the top 15 as well. Others with top 40 single-game totals include Fort Atkinson's Preston Strasburg (409 yards) and Menasha's Tyler Szews (396).

A somewhat new category to the record book, most rushing yards in a game by a quarterback is littered with 2016 mentions, including Simuncak's performance at the top. Blair-Taylor's Josh Nitek is third on the list with 374 yards, while Isiah Wright of Milwaukee Bay View is on the list twice.

No one cracked the single-season rushing list, but Darlington's Hunter Johnson, the WFCA Offensive Player of the Year, did move to 12th on the career list with 5,599 yards. His 98 rushing touchdowns are second on the all-time list, while his 662 points accounted for in his career is tied for second.

In the kicking category, Kimberly's Adam Stage set a new state record with 209 career successful extra points, and is now the all-time leader in points scored as a kicker with 248.

In team records, Kimberly broke the all-time consecutive wins record with 56, and counting. Darlington set a new 9-game regular season scoring record with 533 points, an average of 59.2 per game. Their total season number of 718 points is second.

These are just some of the 2016 players and teams to make an impact on the state's Record Book. Be sure to peruse the full 60-page file