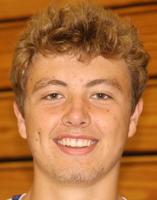 Waukesha North's Johnny Kelliher has been selected as the 2019-20 male recipient of the Pat Richter Award from WisSports.net as the Triple Threat Athlete of the Year.

Hugh V. "Pat" Richter is one of Wisconsin's most storied student-athletes in state history. He was a three-sport athlete at Madison East High School, competing in football, basketball and baseball. He went on to fame at the University of Wisconsin, earning nine varsity letters in three sports and would later become the Athletic Director at Wisconsin.

In football, the 6-foot-5 left-handed quarterback threw for 6,471 yards and 53 touchdowns during his stellar varsity career. Kelliher earned honorable mention and second-team all-league honors at quarterback over the past three seasons in the rugged Classic Eight Conference. He also is a two-time Academic All-State selection and two-time captain for the Northstars.

In basketball, Kelliher averaged 19.6 points per game as a senior while helping Waukesha North to a 10-14 record. A four-year varsity performer for the Northstars, Kelliher scored a career-high 34 points as a senior in a loss to Racine Horlick. The talented forward earned first-team all-league laurels in the Classic Eight as a senior. He also is a two-time team captain for coach Sam Katula and the Northstars.

In baseball, Kelliher received honorable mention, second-team and first-team honors in the Classic Eight during his varsity career. A pitcher and first baseman, Kelliher has accepted a NCAA Division I scholarship to attend UW-Milwaukee and play baseball for the Panthers.

In track & field, Kelliher qualified for the WIAA State Track & Field Meet as a junior in the high jump.

To view our initial profile of Kelliher as part of our Triple Threat Athlete of the Week, please click here.