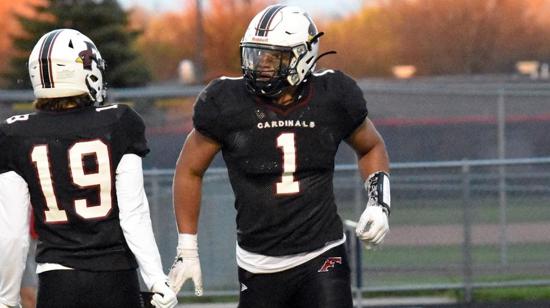 Fond du Lac defensive back Braelon Allen has been selected as the WSN Spring Football Defensive Player of the Year.

Fond du Lac's Braelon Allen was a man-child in what was only his third year in high school, as he'll graduate a year early and head to the University of Wisconsin.

Allen led the Cardinals to a perfect 7-0 mark, capped off by a 71-47 win over Kimberly. He finished first on the team with 57 tackles, adding five tackles for loss, three sacks, a forced fumble, and an interception, playing mostly at safety but also at linebacker and even defensive end.

You have to mention his offensive numbers also, where he ran for 1,047 yards and 21 touchdowns with two more scores through the air.

Other finalists for the award were Kyle Dietzen of Omro, Brooks Empey of Stoughton, Isaac Hamm of Sun Prairie, and Avery Johnson of Lomira.

Wisconsin Sports Network will be recognizing spring football players in this unique season with WSN Spring Football Awards. Similar to our normal WSN Senior Football Awards, the spring awards will recognize the outstanding players around the state. However, these awards are open to players from all grades, not just seniors.

Over the course of the season we will provide watch lists, semi-finalists, finalists, and winners for the following categories: Offensive Skill player, Offensive Lineman, Defensive Player. The lists have been trimmed down to five finalists, with winners announced next week.