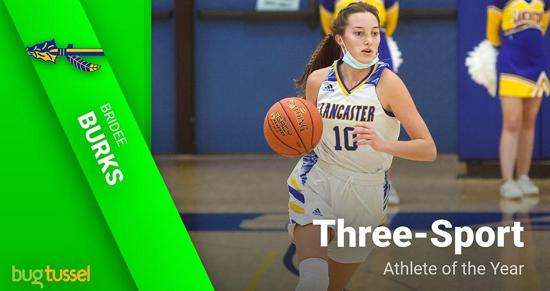 Bridee Burks of Lancaster has been selected as the 2021-22 female recipient of the Pat Richter Award from WisSports.net as the Bug Tussel Three-Sport Athlete of the Year.

The goal and mission of Bug Tussel is to level the playing field for rural residents despite where they may live. Whether you work from home, your office is downtown or you are manning the family farm, they believe residents should be connected without having to compromise speed, price, quality, service or the environment.

In cross country, Burks helped lead Lancaster to a sixth-place finish in Division 3 at the 2021 WIAA State Cross Country Championships as a senior finishing 20th overall. Bridee helped lead the Flying Arrows to Division 3 state titles as a freshman and junior with individual finishes of sixth and seventh overall, respectively.

In basketball, Burks led Lancaster to an 18-8 record with a Division 4 regional final appearance, falling to eventual state champion Mineral Point, 57-46, which finished the year 30-0.

The 5-10 long and athletic guard was named first-team All-SWC and first-team Division 4 WBCA All-State as a senior, averaging 13.2 points, 7.6 rebounds, 2.6 assists, and 2.6 steals per contest for coach Mark Uppena and the Flying Arrows. Burks was also a finalist for the Top Senior Defender by WisSports.net.

When Burks was featured on WSN in September she said the best part of high school sports was finding a true group of friends.

"In every sport I have participated in, we all have the same motivations, and as I surrounded myself with people who have similar intentions I could lean on them for support and comfort. Which is a large part of why our teams are so successful," Burks told WSN.

Burks is signed to play NCAA Division I basketball at Idaho State University.

To go along with the three school-sponsored sports, Bridee was also a standout in rodeo. She was a three-time national qualifier and three-time state champion in two events.

To view our initial profile of Burks as part of our Bug Tussel Triple Threat Athlete of the Week series, click here.