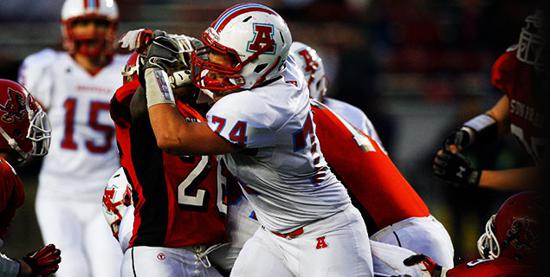 Wisconsin Sports Network and WisSports.net are happy to announce Arrowhead's Ben Bredeson as the 2015 recipient of the Joe Thomas Award as the most outstanding senior offensive lineman in Wisconsin, part of the WSN Senior Football Awards.

Bredeson is a two-time WFCA All-State selection, ranked in the top 50 nationally by most recruiting services, and chose Michigan over scholarship offers from a Who's Who of college programs.

He's a dominating run blocker but athletic enough to play on the edge with good knee bend and agility. Many observers feel he is the best offensive lineman to come out of Wisconsin in many years.

“His play and his character are this year, like the three before, unbelievable,” said head coach Greg Malling. “He is the consummate teammate, an incredible mentor for the younger players, and a dominant force on the game field.”

The award is named after Joe Thomas, a graduate of Brookfield Central High School now playing in the NFL with the Cleveland Browns. Thomas was a three-sport athlete in high school, lettering all four years in football, basketball, and track and field while also being named to the Honor Roll all four years. He started 37 games at left tackle for the Badgers and won the Outland Trophy after his senior season. Thomas was drafted 3rd overall by the Browns in 2007, and has been selected to the Pro Bowl each of his first seven seasons.