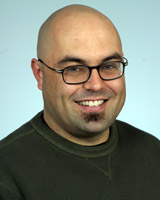 Nicholas Kartos is the founder of WSN and currently serves as Editor Emeritus to the site.

In 2002, Kartos launched WisHoops.net which eventually turned into what would become WSN.  He led the organization through acquisitions by TDS Telecom and later SportsEngine. He served as the Director of Advertising at SportsEngine for four years after they acquired WSN. He now runs GymDandy, an athletic space scheduling company.

Nicholas is originally from North Fond du Lac, WI where he played basketball and golf for the Orioles. He then went on to UW-Madison and graduated with a business degree and a double major of Information Systems and Marketing. He currently resides in Monona with his wife Dana, daughters Maisie and Agnes, and son Leo.

Nicholas served on the executive board of the Wisconsin Basketball Coaches Association for many years. He has been named to InBuisness Magazine's Top 40 Under 40, which spotlights forty of the top young business people in the greater Madison region. He has also appeared on statewide radio and television including FSN Game of the Week, High School Hysteria and Football Friday Night.

Connect with Nicholas on LinkedIn