Here are the Wisconsin Sports Network weekly award winners in boys' basketball for the games played December 1 through December 5:

Brandin Podziemski, 6-6, Sr., G, St. John's Northwestern Academies
With recent scholarship offers from Kansas and Kentucky, a lot of eyes will be on Podziemski this winter. And through week one of the regular season, the 6-foot-6 backcourt prospect has lived up to the reputation associated with offers from heavyweights like Kansas and Kentucky. Podziemski led St. John's Northwestern Acadamies to a 2-0 record with victories over Brookfield Academy and Waukesha West. He scored 36 points on 27 shots against Brookfield Academy, and then had 36 points on 27 shots against Waukesha West. He also snared 25 rebounds in the two games while making 5 of 15 shots from three-point range. Podziemski is playing point guard for the Lancers, and does an excellent job of using his quickness, his shiftiness and his aggressiveness to put constant pressure on the defense. In the open court, he can weave his way around defenders to score with reverse layups or dunks. Look for Podziemski to put up staggering numbers all season for coach D.J. Mlachnik, who is filling in as the Lancers' head coach while his father, Duane, recovers from an illness.

Fall Creek Crickets
Fall Creek made a huge statement in the Western Cloverbelt Conference last week, registering a convincing 81-59 triumph over pre-season league-favorite Altoona. The Crickets of coach Rick Storlie had five players score in double figures in the victory over Altoona, which is playing without injured senior guard Keshawn Harris, the returning Player of the Year in the league. Leading the way for Fall Creek was ever-improving 6-foot-6 senior forward Jayden Fitch, who dominated to the tune of 31 points and 12 rebounds. Fitch averaged 13.2 ppg and 8.3 rpg a year ago as Fall Creek went 12-13, and he made steady progress in his game over the off season. Senior forward Luke Olson (6-4) also turned in a spectacular game for Fall Creek, scoring 12 points, grabbing seven rebounds, handing out four assists and blocking five shots. Senior guard Teigan Ploeckelman (5-11) added 18 points, freshman Bo Vollrath (6-4) contributed 12 points and junior Cameron Martzke (5-10) had 10 points. The Crickets moved to 2-0 with an 81-57 non-league win over Augusta on Saturday with Ploeckelman netting 16 points and Fitch scoring 11 points and grabbing 11 rebounds. Olson had 20 points to lead the way for Fall Creek in the victory over Augusta. 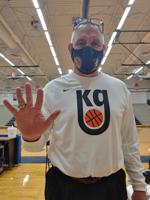 Mike Schalow, Kaukauna
These days, precious few coaches make it to their 26th season as a head coach of a major sport at the same school. In most cases, there is simply too much pressure on one's time, too much parental involvement that can become draining, and too much energy required to make a lifelong career out of coaching at the same institution. However, Mike Schalow is one of those rare breeds. Now in his 26th year directing the fortunes of the Kaukauna Ghosts boys' basketball program, Schalow guided his squad to victories over Appleton North and Oshkosh West in Fox Valley Association play last week, and in the process earned his 500th career victory. Now 501-301 overall and 398-200 at Kaukauna, Schalow is a hard-working, always-learning, never satisfied mentor who teaches the game well, mentors young people even better and is a true ambassador for the game of high school basketball in Wisconsin. Once again, Schalow's Ghosts figure to play a big role in the outcome of the race to the FVA title. After winning WIAA Division 2 state titles in 2016 and 2018, Schalow's Ghosts might not have the firepower to attain that level of success in 2020-21, but they will be no pushover as well, thanks in large part to the stellar coaching of Schalow and his experienced and dedicated coaching staff.