Here are the Wisconsin Sports Network weekly award winners in boys' basketball for the games played January 18 through January 23:

Preston Ruedinger, 6-2, Sr., G, Lourdes Academy
Playing against a Waunakee squad that earlier in the season earned votes in the WisSports.net Coaches Poll for WIAA Division 1 schools, Ruedinger went off for 45 points to lead the Knights, a Division 4 school, to a convincing 88-76 victory. Ruedinger, a four-year varsity performer and son of Lourdes coach Dennis Ruedinger, made 14 of 23 shots against Waunakee, including 8-of-13 from three-point range. Ruedinger also had six rebounds and six assists in the contest. Later in the week, Ruedinger scored 26 points in an 83-58 victory over Omro. Ruedinger is averaging 25.6 points, 7.8 rebounds and 4.6 assists while helping Lourdes to a 12-4 record. He is shooting 48 percent from the field, 84 percent from the free-throw line and 38 percent from three-point range. Ruedinger is just 14 points shy of 2,000 for his prep career. 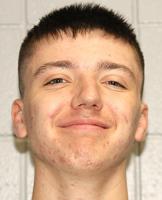 Freedom Irish
Coach John Miron's squad rattled off victories over Marinette, Wrightstown and Sun Prairie last week to improve to 13-3 on the season. Freedom opened the week with a 75-35 triumph over Marinette behind 13 points from junior guard Blake Kotz (6-2) and 11 points from senior guard Tyson Lonigro (6-1). The Irish then got 18 points from senior forward Austin Peterson (6-4) and 15 from senior lead guard Austin Balack (5-11) in a 57-48 road win at Wrightstown in a battle for first place in the North Eastern Conference. In Saturday's 67-61 non-league win over visiting Sun Prairie, junior sharpshooter Landon VanCalster (6-7) scored 26 points for Freedom while teammates Jaden Behnke (6-4) and Jace Midbon (6-3) added 11 each. Freedom holds a one-game lead over Wrightstown in the league standings and has games with Waupaca, Fox Valley Lutheran and Oconto Falls this week. Miron, who previously coached at Kimberly and Ashwaubenon, owns a lifetime mark of 367-228.

Tom Neises, River Ridge
After guiding the Timberwolves to the Six Rivers West Conference title and a 20-5 record in his first year as head coach last season, Neises is turning in some more magic this time around at his hometown school. With impressive road wins over Fennimore, Pecatonica and Wauzeka-Steuben last week, River Ridge improved to 15-0 a year after losing four starters to graduation. Balanced scoring and strong defense have carried the Timberwolves, who overcame an eight-point halftime deficit to notch a 53-52 win over Fennimore as senior Lance Nichols (6-8) scored 18 points and sophomore guard Braden Crubel (5-11) added 13. Last Friday, River Ridge got 18 points and seven rebounds from Crubel in a 56-41 win over Pecatonica, and then on Saturday, River Ridge beat Wauzeka-Steuben 65-59 in overtime as Crubel, Nichols and junior David Nies (6-5) each scored 13 points. Neises, who previously coached at Seneca (girls), St. Mary's Springs, Notre Dame Academy and Xavier, owns a 392-194 career coaching record.