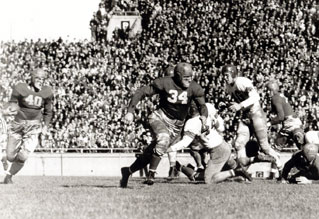 Elroy “Crazylegs” Hirsch (#40 pictured) is one of the most legendary figures in Wisconsin sports and a great person to represent the award given to the most outstanding senior running back in the state. A graduate of Wausau High School, Hirsch was an outstanding multi-sport athlete and inducted into the National High School Sports Hall of Fame in 1988. He would go on to play football at the University of Wisconsin, putting up outstanding numbers and performances in his first season in 1942. It was also during that season that Chicago sportswriter Francis Powers described one of his runs as “his crazy legs were gyrating in six different directions all at the same time.” And so he got his famous nickname.

After joining the military in 1943, Hirsch was transferred to the University of Michigan where he continued his distinguished career, lettering in four sports. Hirsch spent 12 seasons in professional football, including nine seasons with the Los Angeles Rams who moved him to end. His 1951 season is one of the greatest receiving years in NFL history. He caught 66 passes for a record 1495 yards and 17 touchdowns. The yardage mark wasn’t broken for 19 years while his 17 touchdowns tied the record and wasn’t broken until 1984.

Hirsch came home to serve as Wisconsin’s athletic director from 1969 to 1987, overseeing a revival in UW athletics spotlighted by increases in fundraising, attendance, and number of sports offered. He was inducted into the Pro Football Hall of Fame in 1968 and had his number 40 retired by Wisconsin in 2006. Hirsch passed away in 2004, but his name lives on with the popular Crazylegs Run, a UW athletics fundraiser held each spring that attracts more than 10,000 participants each year.

The family of Elroy Hirsch has choosen to support the Crazylegs Classic Run, a Madison tradition for nearly 30 years. The event is one of the primary fundraisers for University of Wisconsin athletics, and to date the event has raised close to $3 million to support UW athletics, underwriting scholarships for men and women student-athletes in all sports.