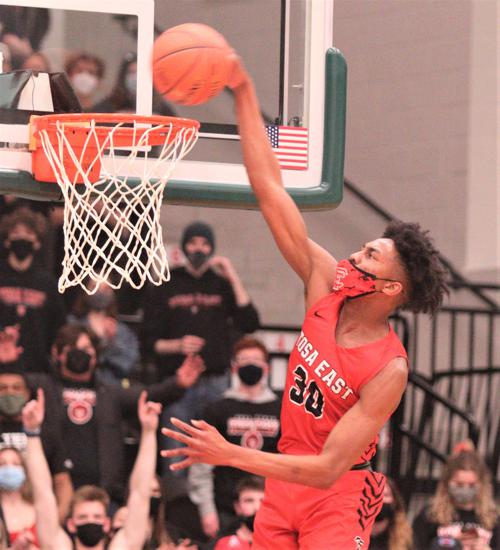 The balance and perimeter shooting accuracy of Pewaukee was too much to overcome for Onalaska, who sustained its first loss of the season 54-37 in the Division 2 title contest. Ashton Janowski scored 19 points and AJ Hintz added 16 to lead Pewaukee, which made nine three-point baskets.

Senior guard Kamari McGee scored 22 of his game-high 26 points in the second half as Racine St. Catherine's won its sixth WIAA boys' basketball title with a 68-49 win over Lake Country Lutheran. Jameer Barker added 14 points and 11 rebounds for St. Catherine's, who also won nine state boys' basketball titles in WISAA to give the school 15 overall.

The Magic of March made its presence felt in a big-time way in Division 4 as Lourdes Academy's Nathan Slagter's floater over the outstretched arms of The Prairie School's Antuan Nesbitt swished through the basket as the final horn sounded, giving the Knights a dramatic 43-41 victory after trailing by as many as 20 points in the first half. Preston Ruedinger and Josh Bauer had 13 points each to lead Lourdes, which won its first WIAA title after capturing the WISAA Division 2 crown in 1999.

Hustisford scored the first 10 points of the contest and cruised the rest of the way in posting a thoroughly convincing 69-35 win over McDonell Catholic in the Division 5 title contest. Seniors Dylan Kuehl (6-6) and Alex Eggleston (6-9) combined for 11 blocked shots and seven dunks for the Falcons.

Brian Parzych, 6-3, Sr., PG, Wauwatosa East -- Parzych was the vocal and emotional leader for Wauwatosa East. His will to win rubbed off on his teammates and was fully evident when he hit a three-point basket and then delivered a terrific assist after the Red Raiders fell behind by a single point in the semifinals against River Falls. Parzych finished with 27 points, nine rebounds, 11 assists and eight steals in two games for Wauwatosa East, which finished its season with a 23-3 record and the Division 1 Gold Ball.

Jameer Barker, 6-2, Sr., G/F, Racine St. Catherine's -- Barker turned in two very strong performances for St. Catherine's, which finished the season 28-1 and won the Division 3 title. Barker had 22 points and 16 rebounds in a 53-44 semifinal win over Wrightstown, and then popped in 14 points, grabbed 11 rebounds and dished out five assists in the 68-49 win over Lake Country Lutheran in the title game.

Ashton Janowski, 6-2, Jr., G, Pewaukee -- One of the better class of 2022 backcourt prospects in the state, Janowski has the ball on a string and probes the defense well with his quickness while searching for open teammates or scoring opportunities for himself. He finished with 19 points and four rebounds in the state-title game win over Onalaska, and had 10 points and four assists in the semifinal win over Lake Mills.

Jackson Paveletzke, 6-1, Jr., G, Kimberly -- Paveletzke's showing in the Papermakers' semifinal win over De Forest was simply outstanding as he finished with 28 points, 10 rebounds and seven assists. His basketball IQ, high skill level and ability to make those around him better with his passing were on full display in that contest. He struggled some against the stellar defense of Wauwatosa East in the title game, finishing with 14 points and six assists.

Jay Hinson Jr., 6-3, Sr., G, Wauwatosa East -- Hinson and his teammates were extremely impressive in wins over River Falls and Kimberly. Hinson did a stellar job of guarding two of the state's better backcourt players in Zac Johnson of River Falls and Jackson Paveletzke of Kimberly. In addition to his strong defense, Hinson also scored 24 points and snared six rebounds for coach Tim Arndorfer and the Red Raiders.

Antuan Nesbitt, 6-4, Sr., G/F, The Prairie School -- Nesbitt was steady and productive for the Hawks, who beat Luther 61-46 in the Division 4 semifinals before falling to Lourdes Academy 43-41 in the title game. Nesbitt, a NCAA Division II recruit for Northern Michigan, finished with a combined 30 points, 11 rebounds and 11 assists. His unselfish play, strong defense and overall skill impacted the game in an extremely positive manner all season for coach Jason Atanasoff and the Hawks.

Josh Bauer, 6-0, Sr., Lourdes Academy -- Bauer gave Lourdes the separation it needed to pull away from Edgar in the second half of the Division 4 semifinals. He finished that contest with 24 points and four rebounds. In the Knights' win over The Prairie School in the title game, Bauer finished with 13 points and five rebounds.

Luke Heartle, 6-2, Jr., G, Lake Country Lutheran -- Heartle showed his versatility and ability to fill up a stat sheet in Lake Country Lutheran's 59-47 win over St. Croix Central in the Division 3 semifinals as he finished with 20 points, 12 rebounds and four assists. The talented junior guard was the focus of St. Catherine's defense in the title game, but he still managed to score 16 points in a loss.

Kamari McGee, 6-0, Sr., G, Racine St. Catherine's -- McGee had a quiet game against Wrightstown in the semifinals as he encountered early foul trouble. But the Green Bay recruit carved up Lake Country Lutheran for 26 points and four rebounds in the title game, consistently weaving his way to the basket for layups. His quickness, leadership and steady mental approach were huge assets all year for the Angels.

Preston Ruedinger, 6-2, Sr., G, Lourdes Academy -- Ruedinger is well known for his scoring and shooting ability, but his passing is what most will remember after his nifty assist to Nathan Slagter in the final seconds of the Knights' come-from-behind 43-41 win over The Prairie School gave the school its first WIAA state title. Ruedinger had 31 points, 10 rebounds and nine assists in two state-tournament games for Lourdes Academy and completed his sensational four-year prep career with 2,349 points. That is the 11th most in Wisconsin prep history and ranks No. 1 for the state's talented 2021 class.

Dylan Kuehl, 6-6, Sr., G/F, Hustisford -- Kuehl helped Hustisford to wins over Wauzeka-Steuben and McDonell Catholic. He had 19 points and 10 rebounds in the semifinals over Wauzeka-Steuben and then had 20 points, 11 rebounds, four rebounds and three blocked shots in the win over McDonell. Kuehl had several crowd-pleasing dunks in the triumph over McDonell, and appears poised for future success at NCAA Division II Northern Michigan.

AJ Hintz, 6-0, Sr., G, Pewaukee -- Hintz set the tone early for Pewaukee in its triumph over Onalaska by making one big three-point basket after another. He finished the contest with 16 points and made all three of his attempts from three-point range.